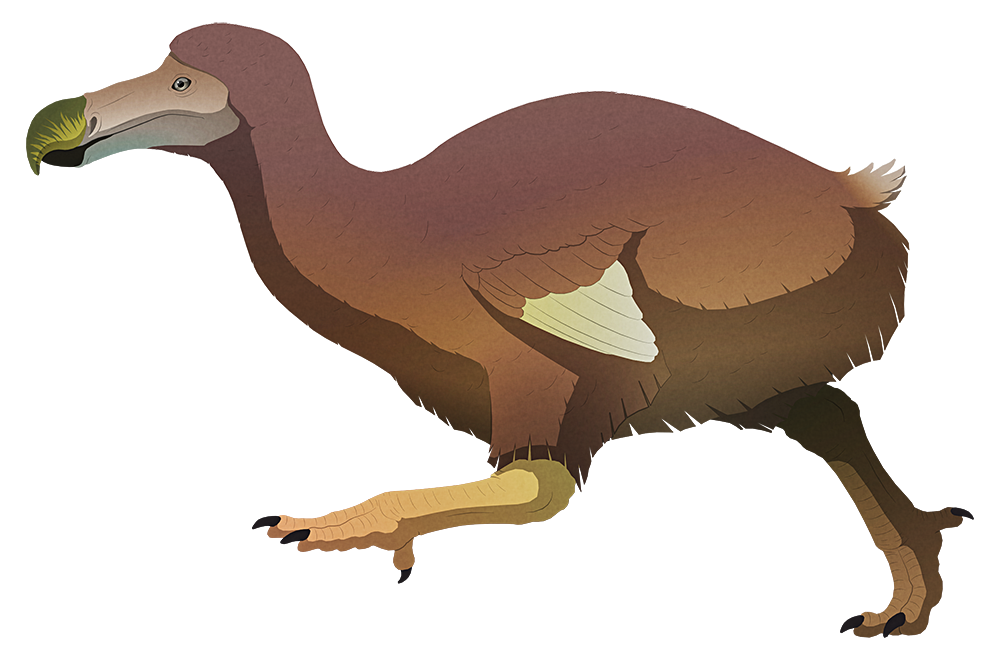 Out of all the extinct island species we’ll be covering in this theme, there’s probably none more famous than the dodo (Raphus cucullatus) – a large flightless pigeon about 1m tall (3′3″).

The island of Mauritius was formed from a volcanic hotspot in the Indian Ocean about 10-7 million years ago, in a location roughly 1000km east of Madagascar (~620 miles). The dodo’s smaller flying ancestors must have arrived there sometime after that point via island-hopping from Southeast Asia – the area where its closest living relative the Nicobar pigeon is still found today – and finding themselves in an ecosystem completely lacking terrestrial mammals they quickly evolved to fill a large herbivore niche.

Although frequently depicted as blue-grey, the dodo’s actual life appearance is unknown for certain. No complete preserved specimens have survived into the present day, and contemporary accounts and drawings are somewhat inconsistent – but common elements among them suggest it was more of an earthy brown, with cream-colored primary feathers, yellow legs, a naked pale face, and a green-and-yellow streaked beak. The large white ostrich-like tail plumes shown in many images have also probably been highly exaggerated, since older images depict the dodo with only a tiny tufted tail at best.

Its appearance probably also varied based on the time of year, molting its feathers at the end of summer and being fattest during the breeding season in early spring.

And despite often being stereotyped as a slow dim-witted animal, the proportions of the dodo’s leg bones suggest it was actually quite fast and agile. Its brain-to-body size ratio was also typical compared to other pigeons – which are known to be highly intelligent birds – and it had a well-developed sense of smell.

Sadly this fascinating bird disappeared within only a century of being discovered by humans in the late 1500s. Its “island tameness” due to its lack of natural predators made it easy prey, its forest habitat was rapidly destroyed, and introduced mammal species (such as dogs, pigs, cats, rats, and macaques) competed for its food sources and ate its eggs and young – pressures that its population simply couldn’t hope to recover from all at one.

Its loss wasn’t even properly recognized until much later in the 1800s, but since then it has ironically become immortalized as a icon of human-caused extinction.