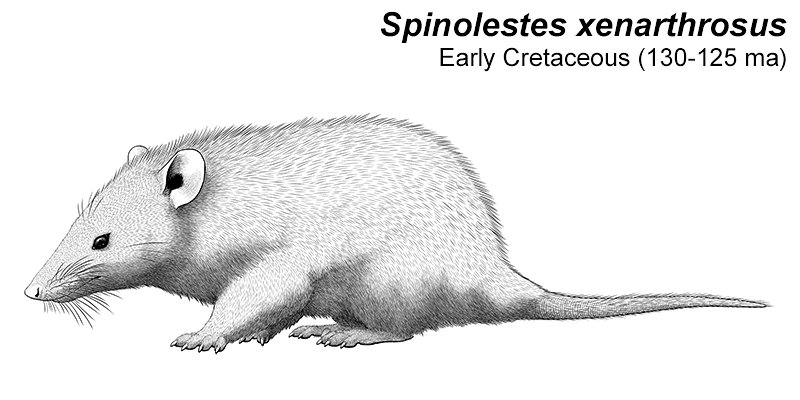 Spinolestes was another gobiconodontid eutriconodont, closely related to Repenomamus but not quite so large. About 25cm long (10″), it’s known from an incredibly well-preserved fossil that includes fine microscopic details of fur, skin, and internal organs. Notably even its external ears were preserved, the earliest known in the fossil record, showing a broad mouse-like shape.

Its coat was made up of both underfur and guard hairs, with a longer mane along its neck and back. There were around a dozen keratinous scales on its rump, under the fur, along with numerous “protospines” – stiff spiky hairs similar to those of modern spiny mice. Some hairs even show damage that matches symptoms of a fungal infection.

It also had strong forelimbs and a reinforced spine similar to both modern xenarthrans and hero shrews. It was likely an insectivore, and may have used its strong back much like hero shrews are thought to do, pushing under heavy logs and rocks and levering them up to find invertebrate prey underneath.