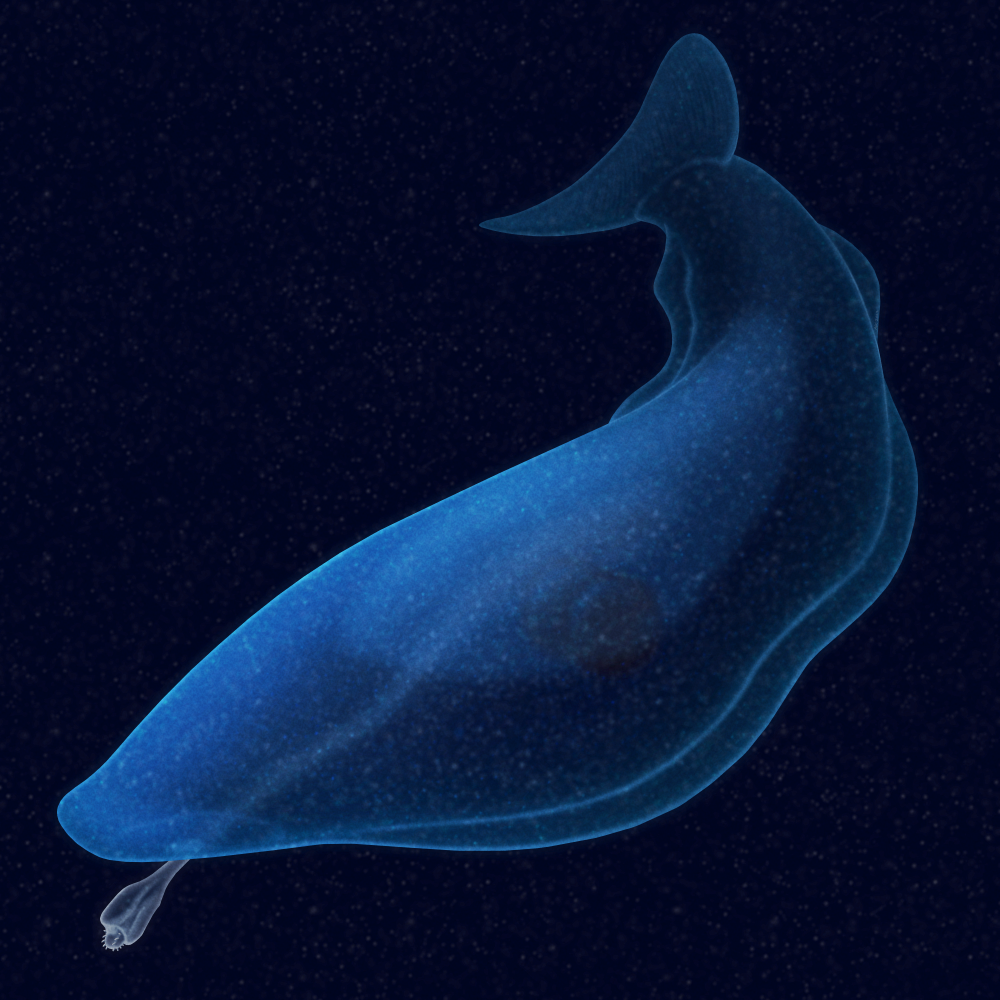 Typhloesus wellsi has been a mystery for a long time.

First discovered in the early 1970s, in the mid-Carboniferous Bear Gulch Limestone deposits (~324 million years ago) of Montana, USA, it was initially mistaken for the long-sought-after “conodont animal” due to the presence of numerous conodont teeth inside its body. But just a few years later well-preserved eel-like conodont animals were found elsewhere, and it became apparent that the conodont teeth inside Typhloesus had actually just been part of its last meal.

But if it wasn’t a conodont… then what was it?

Up to about 10cm long (4″), Typhloesus had a streamlined body with a vertical tail fin and paired “keels” along its sides. It had a mouth and a gut cavity, but no apparent anus, and it also didn’t seem to have any eyes or other sensory structures. And in the middle of its body there was something very weird – a pair of “ferrodiscus” organs, disc-shaped structures which contained high concentrations of iron but whose function was completely unknown.

This anatomy just didn’t match any other known animals, so much so that it gained the nickname of “alien goldfish”.

For the next few decades it remained a bizarre enigma, at best tentatively considered to represent an unknown lineage of some sort of metazoan that left almost no other fossil record due to being entirely soft-bodied.

But now, 50 years after its initial discovery, we might just finally have a clue about Typhloesus’ true identity.

Recently something new was discovered in some Typhloesus specimens – a radula-like feeding structure that was probably part of an eversible proboscis. This would mean that Typhloesus was a mollusc, possibly a gastropod that convergently evolved a swimming predatory lifestyle similar to modern pterotracheoids.

It’s not a definite identification yet, and even if it was a mollusc it was an incredibly strange one, with features like the ferrodiscus still lacking any explanation. But this discovery at least shows that there are still new details waiting to be found in the “alien goldfish” fossils, and gives us a start towards bringing its classification back down to earth.

Found only in the Carboniferous-aged Bear Gulch Limestone (~318 mya) in Montana, USA, Typhloesus wellsi is such a confusing animal that it’s been nicknamed “the alien goldfish”.

It was one of the first body fossils found containing conodont elements, leading to it initially being identified in the 1970s as the then-unknown conodont animal – until actual conodont animals were discovered a few years later, looking nothing like it. The elements were reassessed as actually being Typhloesus’ gut contents, indicating it was actually a conodont-eating predator or scavenger.

Reaching sizes of almost 10cm long (4″), it was vaguely fish-shaped with a pair of ventral fin folds and a stiffened vertical tail paddle. No obvious sensory structures are preserved, but there are impressions of a large gut cavity in the front half of its body, along with a pair of strange unidentified organs known as “ferrodiscus” that contained a high concentration of iron deposits.

And despite being known from over 50 specimens, we still don’t know where to classify it. At all. It lacks evidence of features like gill openings or a notochord that could associate it with chordates. Its gut appears to be a blind sack with no anus, a condition usually seen only in cnidarians and flatworms, and finned active swimmers are known in other invertebrate groups like molluscs and arrow worms, but Typhloesus doesn’t resemble anything like those either.

With the similarly mysterious Tullimonstrum recently getting a lot of attention and a possible identification as a lamprey-relative, perhaps somebody will eventually have another look at this strange little creature, too.

[EDIT: A 2022 study found evidence of a molluscan affinity for Typhloesus!]