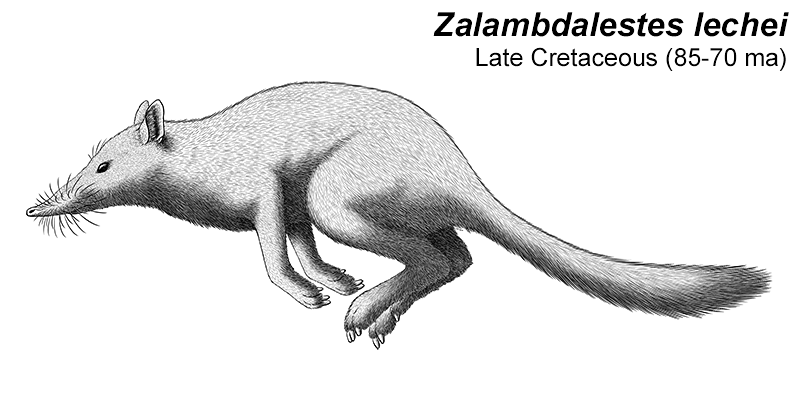 Living during the Late Cretaceous of Mongolia (85-70 mya), Zalambdalestes was part of a highly specialized group of mammals that it lends it name to – the zalambdalestids – which were an early branch of the eutherian evolutionary tree.

About 20-25cm in length (8-10″), it had relatively long limbs with especially strong hindlegs that show adaptations for rabbit-like hopping. Its long narrow snout may have ended in a flexible proboscis similar to those of modern sengi, and sharp interlocking teeth indicate a carnivorous or insectivorous diet.

Its long rodent-like incisors grew continuously throughout its life, suggesting it was gnawing on something tough enough to constantly wear down its front teeth.

Some studies have proposed that zalambdalestids were actually very basal members of placental mammal groups such as rodents or rabbits, but the presence of epipubic bones in front of their pelvises (bones not found in placentals) shows they were a much earlier type of eutherian that still reproduced more like marsupials. Any anatomical similarities to later placentals were probably just the result of convergent evolution.