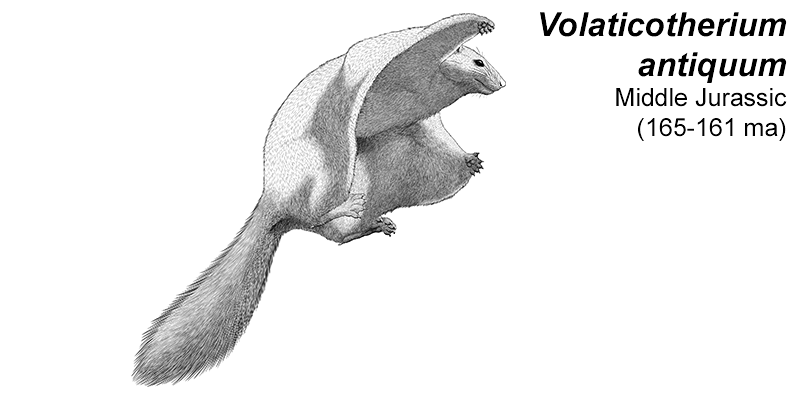 One of the earliest major branches of the theriiformes were the eutriconodonts. First appearing in the fossil record in the Early Jurassic, about 190 million years ago, these mammals were a highly successful group that adapted to a variety of different niches and lasted up until nearly the end of the Cretaceous.

Their exact relationships to other theriiformes are a little uncertain, with it being unclear whether they split off before or after the multituberculates (another major group featured later this month).

Volaticotherium is known from the Middle Jurassic of China (165-161 mya), and was the first gliding Mesozoic mammal to be discovered (although we now know about quite a few more). It was part of a branch of the eutriconodonts known as the volaticotherians, a widespread lineage which ranged through most of the Jurassic period and into the mid-Cretaceous.

Measuring about 26cm long (10″), or about 14cm (5.5″) excluding the tail, it’s known from a mostly complete skeleton with impressions of fur and skin. A gliding membrane extended from its hands to its hindlimbs and the base of its tail, its feet had grasping toes, and its tail was flattened to create an airfoil-like shape.

It had sharp slicing teeth, indicating a carnivorous or insectivorous diet – unusual since most other known gliding mammals are predominantly herbivores.