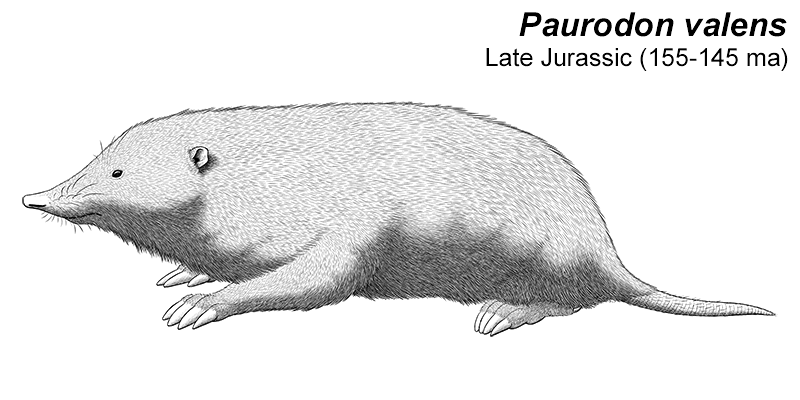 Some of the closest cousins to the therians, or perhaps even their direct ancestors, dryolestoids first appeared in the mid-Jurassic (~168 mya) and were found throughout North America, Eurasia, and North Africa up until the Early Cretaceous (~125 mya). But despite mostly disappearing from the northern hemisphere fossil record at that point, they moved into South America and flourished, becoming some of the most diverse and common mammals there during the Late Cretaceous.

A few even survived the end-Cretaceous mass extinction, with one of the largest members of the group known from the start of the Cenozoic. Then they disappeared again, only for a final survivor to turn up in the Miocene – just 17.5 million years ago.

(There’s also a fringe proposal that modern marsupial moles might even be living dryolestoids – but that paper hasn’t been peer-reviewed and genetic analyses still place them firmly as true marsupials.)

Paurodon lived during the Late Jurassic of western North America (155-145 mya). Although known only from jaws and teeth, the fossil material seems to represent a series of different growth stages, and it was probably a mouse-sized animal growing to about 10-15cm long (4-6″)

Although some of its close relatives appear to have been tree-climbers, Paurodon’s jaws strongly resemble those of modern golden moles – suggesting it was similarly specialized for a diet of earthworms, and may even have had a subterranean mole-like lifestyle.