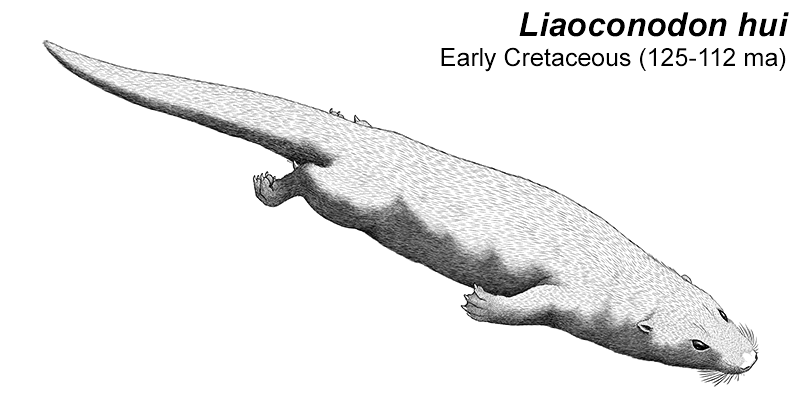 The last eutriconodont featured this month specialized for a semi-aquatic lifestyle very similar to modern otters.

Known from the Early Cretaceous of China (125-112 mya), Liaoconodon was about 35cm long (1′2″) and had a long streamlined body and paddle-like limbs. Like other eutriconodonts it was carnivorous, likely feeding on fish and aquatic invertebrates in its wetland habitat.

Its ears show a transitional state between those of earlier mammaliaformes and modern mammals, with the inner ear bones almost fully separated from the jaw aside from a thin rod of cartilage. While this cartilage disappears during embryonic development in modern mammals, in Liaoconodon it was ossified (turned to bone) and appears to have helped to support the eardrum – although it’s not clear whether this was the ancestral state for Mammalia and fully separated ear bones convergently evolved multiple times in different lineages, or whether this was an evolutionary reversal within the eutriconodonts.