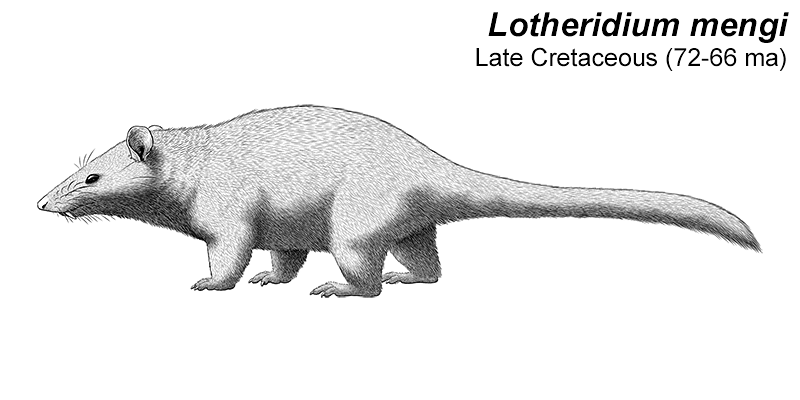 In modern times the therian mammals are represented by just two surviving groups – placentals and marsupials. But both of these lineages contained many other extinct close relatives, and this final week of the month will focus on a few of them.

Modern marsupials are part of a larger grouping known as metatherians which split off from their common ancestor with placentals during the Jurassic period, at least 160 million years ago. Probably originating in Asia, they spread to Europe and the Americas during the Cretaceous, and diversified into several different groups – including some which would go on to become the dominant mammalian predators in South America during its long period of isolation in the Cenozoic.

One of the earliest branches of the metatherians were the deltatheroideans. These mammals are known from Asia and North America, evolving to fill vacant small carnivore niches after the disappearance of most of the eutriconodonts. Most of them went extinct at the end of the Cretaceous, but a few did survive for at least 10 million years afterwards.

Lotheridium was a deltatheroidean living during the Late Cretaceous of China (72-66 mya), and is known from a nearly complete skull. It’s likely to have had a head-and-body length of about 20cm (8″), and may have had a full length including the tail of up to 30-40cm (1′-1′4″).

It had elongated canine teeth, convergently similar to the saberteeth of many later mammal groups. It was probably a highly specialized predator, and may even have been capable of preying on small dinosaurs – its close relative Deltatheridium is known to have eaten theropods like Archaeornithoides.