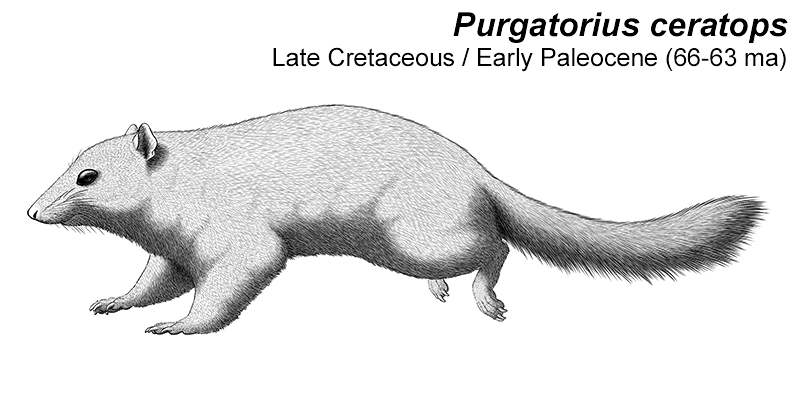 Quite a few groups of Mezozoic mammals actually made it into the Cenozoic – including multituberculates, dryolestoids, various different metatherians, cimolestans, leptictidans, and possibly another unknown lineage in New Zealand – but most of them eventually declined and died out, and only monotremes, marsupials, and placentals still remain alive today.

We don’t know exactly when placentals originated. The first definitive fossils come from the start of the Cenozoic, but a few early ancestral forms probably already existed during the Late Cretaceous (estimated up to 90-75 mya) and only got their chance to rapidly diversify immediately after the mass extinction event.

One of the closest fossils we have to the earliest placentals is Purgatorius. Known mainly from teeth from the Early Paleocene of North America (66-63 mya), it’s not entirely clear whether it actually existed in the Mesozoic, but its remains have been found very close to the K-Pg boundary and one fossil might actually be from the end-Cretaceous.

A few foot bones have been associated with some of the fossil teeth, and if they do belong to Purgatorius then they show that it had very flexible ankles, a characteristic typical of tree-climbing animals. It would likely have been a squirrel-like creature, about 15-20cm long (6-8″), eating an omnivorous mixture of insects, seeds, and fruit. It may also have been capable of burrowing similar to modern chipmunks.

It’s often been interpreted as a placental mammal, specifically a very early type of primate, but more recent studies suggest it might not even be a true placental at all  – although it was probably still a very close relative of the common ancestor of all living placentals.