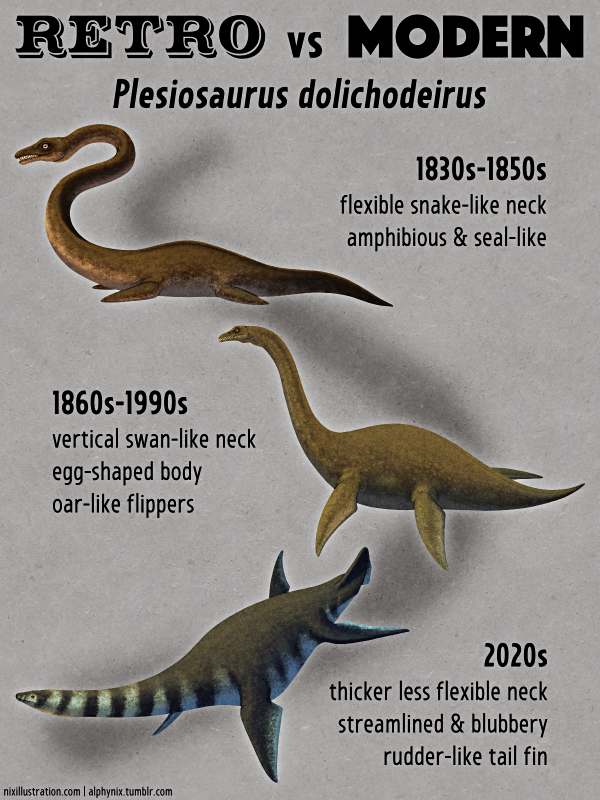 Plesiosaurs were first recognized as a distinct group of fossil animals in the early 1820s, only a few years after ichthyosaurs. Initially they were perceived as being closer in form to reptiles in the “chain of being” than the more fish-like ichthyosaurs were, and so the group’s scientific name ended up reflecting that early interpretation – “plesiosaur” roughly translates to “near to reptiles”.

The first named species of plesiosaur was Plesiosaurus dolichodeirus, based on a near-complete skeleton discovered by Mary Anning that revealed the strange long-necked proportions of these animals for the first time.

Early reconstructions of plesiosaurs in the 1830s compared them to “a snake threaded through a turtle”, giving them highly sinuous necks and a turtle-like body. Much like ichthyosaurs they were assumed to be amphibious, using their flippers to crawl up onto the shore like a sea turtle.

The 1850s Crystal Palace plesiosaur statues show a variant of this design with smooth skin textures and fairly flexible reptilian bodies, with powerful shoulders and flipper postures that give them an overall almost seal-like appearance.

From the 1860s onwards a more upright S-shaped neck pose became the most common depiction of plesiosaurs. The writhing snake-like necks persisted in some reconstructions of the extremely long-necked elasmosaurids, but the overall design for these animals that caught hold for the next century was an egg-shaped body with oar-like flippers and a swan-like neck – a body plan that would end up so influential in pop culture that it was incorporated into modern lake monster folklore, with the Loch Ness Monster being the most famous example.

During this period plesiosaurs were often portrayed as floating or swimming at the water’s surface, rowing along with their flippers and using their long necks to snatch up prey. They were generally assumed to still haul out turtle-style to lay their eggs on the shore, although it wasn’t clear how the very largest species would have been able to support their own weight.

Since the 1990s a boom of new plesiosaur species and biomechanical studies have brought a lot of changes to our understanding of these marine reptiles.

Their necks are now considered to have been less flexible, capable only of more gentle curving, and were probably much thicker and more streamlined with the body than previously depicted. Rather than oar-like rowing all four of their flippers were probably used in more of an “underwater flying” vertical motion similar to modern sea turtles – which is pretty fitting, considering that their closest living relatives are now thought to actually be turtles.

They gave live birth and were probably warm-blooded, with a thick layer of insulating blubbery fat and a teardrop-shaped body outline. Their skin texture was smooth, but one exceptionally well-preserved specimen shows a covering of tiny thin millimeter-sized scales that wouldn’t have been visible in life except in extreme closeup.

We now know Plesiosaurus itself was a fairly small species, around 3.5m long (~11’6″), with a broad body and a short thick tail that probably had a rudder-like fin – usually assumed to be vertically-oriented, but possibly horizontal instead. It lived during the Early Jurassic, about 201-183 million years ago, in the shallow tropical sea that covered what is now southern England, and had a rather small head compared to other plesiosaurs, with its eyes facing upwards and to the sides.

It had sharp needle-like teeth that would have been used to catch soft-bodied aquatic prey like fish and cephalopods. It’s not known whether it had extensive fleshy lips, croc-like snaggletoothed jaws, or something in-between, so the facial soft tissue on this particular reconstruction is rather speculative.