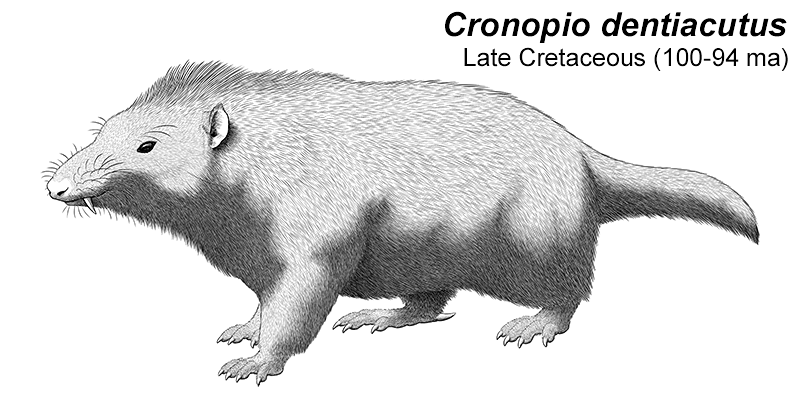 Cronopio was one of the earliest South American dryolestoids, living during the start of the Late Cretaceous of Argentina (100-94 mya). Known only from partial skull material, it had a long snout and enlarged canine teeth which gave it a superficial resemblance to the fictional “sabertoothed squirrel” Scrat from the Ice Age film series.

Although its full size and appearance is unknown, it’s estimated to have measured about 15cm long (6″). It was probably an insectivore or an omnivore, but the rather delicate nature of its snout and fangs suggest it had a weak bite and relied on strong jaw muscles to chew up its food with a specialized rotating motion. It’s also not clear whether its saberteeth had a function for feeding, or if they were used for display and fighting like in some modern deer.

And while I’ve reconstructed Cronopio here with ankle spurs, it’s actually unknown whether dryolestoids had this feature. They occupied an evolutionary position between mammals that definitely had spurs (symmetrodonts) and ones that definitely didn’t (therians), but fossil remains of dryolestoid ankles are poorly-preserved and incomplete.

(I also wanted to do a depiction that wasn’t so blatantly Scrat-like, because that’s become sort of a paleoart meme. Soft-tissue and long fur can really change the outward appearance of mammals, so enjoy this weird tiny pig-rat version of Cronopio.)