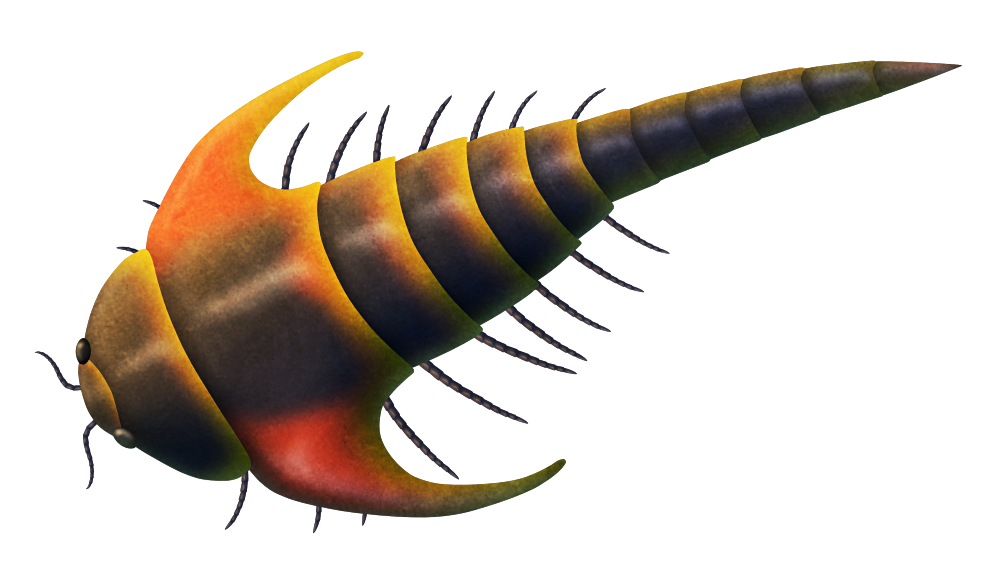 Euthycarcinoids were a group of arthropods that lived between the mid-Cambrian and the mid-Triassic – but despite existing for over 250 million years their fossil record is incredibly sparse, and it’s only within the last decade that they’ve been recognized as being close relatives of modern centipedes and millipedes.

The earliest members of this group were marine, living in shallow tidal waters, but they quickly specialized into brackish and freshwater habitats and were even some of the very first animals to walk on land. Fossil trackways show they were amphibious, venturing out onto mudflats to feed on microbial mats, avoid aquatic predators, and possibly lay their eggs in a similar manner to modern horseshoe crabs.

Most euthycarcinoid species are known from tropical and subtropical climates, but Antarcticarcinus pagoda here hints that these arthropods were much more widespread and diverse than previously thought. Discovered in fossil deposits in the Central Transantarctic Mountains of Antarctica, it lived in freshwater lakes during the Early Permian (~299-293 million years ago), at a time when the region was in similar polar latitudes to today with a cold icy subarctic climate.

About 8.5cm long (3.3″), it would have had a similar three-part body plan to other euthycarcinoids – with a head, a limb-bearing thorax, and a limbless abdomen ending in a tail spine – but its most distinctive feature was a pair of large wing-shaped projections on the sides of its carapace. These may have helped to stabilize its body when resting on soft muddy surfaces, spreading out its weight, or they might even have functioned as a hydrofoil generating lift while swimming.

END_OF_DOCUMENT_TOKEN_TO_BE_REPLACED

In the final stretch of this month we finally come to the last of the major groupings of euarthropods: the mandibulates, which include the modern myriapods (centipedes and millipedes) and pancrustaceans (crustaceans and insects), along with several extinct groups.

Characterized by possessing mandible mouthparts, mandibulates are by far the largest lineage of arthropods and the most successful group of animals on Earth. Over a million living species are known (most of of which are insects, particularly beetles) and an estimated six-to-ten times more than that are probably still undiscovered.

Mandibulates probably diverged from their chelicerate cousins around the start of the Cambrian 540 million years ago. If the trilobites and their artiopodan relatives were early or stem-mandibulates then the earliest known fossils of the group are about 521 million years old, otherwise the first records come from a few million years later in the Chinese Chengjiang fossil deposits (~518 million years ago).

END_OF_DOCUMENT_TOKEN_TO_BE_REPLACED

Most trilobites were able to roll themselves up into a protective ball – a behavior known as enrollment or volvation – exposing just their heavily armored backs to attackers. They’re often found fossilized curled up like this, and rare preservation of soft tissues shows that they had a complex system of muscles to help them quickly achieve this pose while simultaneously tucking their antennae and all their limbs safely inside their enrolled shells.

Some species also developed sharp defensive spines and spikes that jutted out when they enrolled, making themselves even more daunting to potential predators in one of the earliest known examples of an evolutionary “arms race”.

END_OF_DOCUMENT_TOKEN_TO_BE_REPLACED

The biggest stars of the Cambrian euarthropods, and most of the Paleozoic Era, were of course the trilobites. Known from literally tens of thousands of species spanning over 270 million years, they’re some of the most recognizable and popular fossils.

Trilobites’ exact evolutionary origins and transitional forms are unknown, but they’re thought to have originated in Siberia in the very early Cambrian and their leg anatomy indicates they were a part of the artiopodan lineage. They made a sudden and dramatic entrance to the fossil record about 521 million years ago, appearing fully-formed and rapidly diversifying and spreading all around the world within just a couple of million years.

Their hard calcified exoskeletons made them much more likely to fossilize than soft-bodied animals, with a distinctive three-part body plan consisting of a head shield, three-lobed thorax segments, and a tail shield. Each individual regularly molted their carapace throughout their life, meaning that most trilobite remains are actually empty discarded shells rather than actual carcasses.

Along with being heavily armored arthropod tanks, most species were also able to roll themselves up to defend against predators, and some developed additional elaborate spines and spikes.

…And some were just weird.