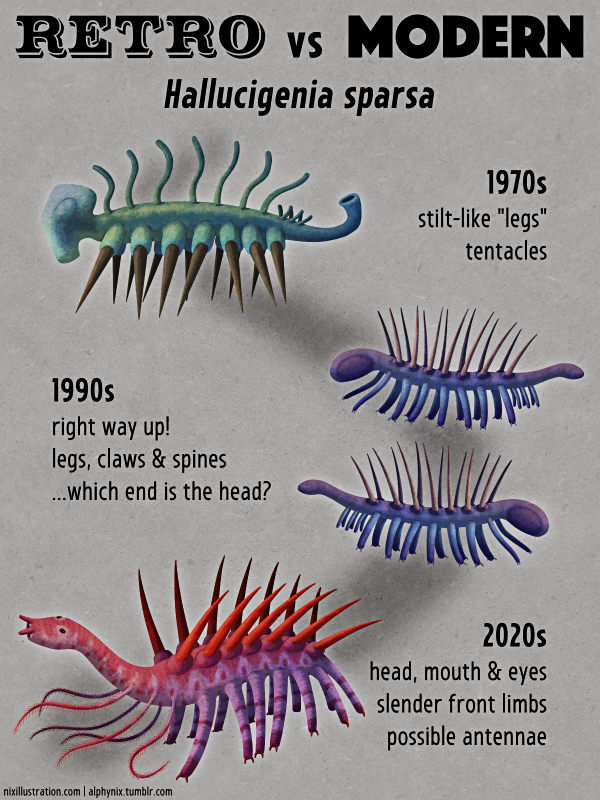 If just one single species had to represent how our reconstructions of prehistoric animals can drastically change, it would have to be Hallucigenia sparsa.

First discovered in the 1910s in the Canadian Burgess Shale fossil deposits, specimens of Hallucigenia were initially categorized as being a species of the early polychaete worm Canadia. It wasn’t until the 1970s that they were recognized as being something else entirely, and the first reconstruction of this tiny animal was bizarre.

It was depicted as a long-bodied creature with a single row of tentacles along its back, and several pairs of long sharp spines that were interpreted as being stilt-like “legs” used to walk. The tentacles were thought to catch food from the water and pass it forwards to the bulbous “head” – and at one point it was even proposed that all the tentacles had their own additional “mouths” at their tips!

It’s easy to look back on this version now and laugh at how ridiculous and obviously wrong it was, but it’s important to remember the historical context here. This was coming from a point when the incredible animal diversity of the Cambrian Explosion was only just starting to be understood, revealing a range of poorly-understood bizarre and alien-looking forms like Opabinia – “weird wonders” that were considered to be representatives of previously unknown ancient branches of life.

At the time, Hallucigenia‘s utter weirdness and impractical body plan seemed to almost make sense as a unique evolutionary “failed experiment” that had left no living relatives.

Discoveries of legged-and-armored lobopodian “worms” in the Chinese Chengjiang fossil deposits during the 1980s prompted a re-interpretation of Hallucigenia in the early 1990s. Speculatively reconstructing it as a lobopodian with the spines on its back and with the tentacles as a set of paired clawed legs started to make it seem a lot less alien and a lot more like a real velvet-worm-like animal – and just a year later the “missing” other half of the leg pairs was confirmed to be present in some of the fossil specimens.

But it was still unclear which end was actually the head, and whether the large blob-like structure was a real part of Hallucigenia‘s anatomy or just an artifact of the fossilization process.

New research in the mid-2010s finally settled the head problem and clarified a lot of Hallugicenia‘s anatomy, discovering that the slender elongated end had a pair of simple eyes and a mouth with a throat ringed with tiny teeth.

We now know Hallucigenia sparsa lived all around the world during the mid-Cambrian, about 518-508 million years ago, with body fossils known from Canada and China and isolated spines found in numerous other similarly-aged locations. Instead of an evolutionary dead-end “weird wonder” it was actually an early member of the vast arthropod lineage, just one of a highly diverse collection of successful Cambrian lobopodians, and its closest living relatives are probably velvet worms and tardigrades.

It grew up to about 5cm long (2″) and had seven pairs of long sharp defensive spines along its back, covered with a microscopic surface texture of tiny triangular “scales”. It had seven pairs of clawed walking legs, with most of its feet tipped with two claws each but the final two pairs having just one, and its body ended right at the final pair of limbs – the “blob” structure in some fossils was actually just an artifact the whole time, formed by Halligenia‘s innards being forcefully squeezed out during its burial in the seafloor sediment.

Its neck region bore three pairs of long delicate tendril-like limbs, which may have been covered in feathery hair-like structures for filter-feeding similar to some other lobopodians. A small pair of velvet-worm-like antennae may also have been present on its head, and could have been a sexually dimorphic feature.

Probably evolving from Siberion-like lobopodians, the dinocaridids were an “evolutionary grade” of panarthropods that were closely related to the ancestors of true arthropods. These animals were characterized by specialized front appendages on their heads and large swimming lobes along the sides of their segmented bodies, and their group included some of the most famous of the Cambrian “weird wonders”.

The earliest branches of the dinocaridids were the “gilled lobopodians”, which had lobopodian-like legs on their undersides and gills on the upper surfaces of their body lobes. The flap-like structures may have initially evolved just to provide a larger surface area for respiration, but they were quickly co-opted for swimming purposes and opened up a whole new range of ecological opportunities to the ancestral dinocaridids.

END_OF_DOCUMENT_TOKEN_TO_BE_REPLACED

Most lobopodians looked fairly similar to each other, many resembling armored velvet worms, but some of these early panarthropods evolved much more diverse body plans and ecologies during the mid-Cambrian.

END_OF_DOCUMENT_TOKEN_TO_BE_REPLACED

The earliest panarthropods were the lobopodians, small soft-bodied segmented worm-like animals with many pairs of legs, usually tipped with claws, and sometimes elaborate ornamentation on their bodies such as spikes, armor plates, and fleshy bumps.

Since they occupy a basal position among panarthropods it’s likely they weren’t really a distinct lineage or phylum, and were probably more of an “evolutionary grade” of various weird early forms, with tardigrades, velvet worms, and potentially all other arthropods descending from somewhere among their ranks.

While little is known about their lifestyles they seem to have had a wide range of ecological roles, including predators, grazers, scavengers, and even filter-feeders. They’re mostly known  from around the world in the mid-Cambrian, but fossils from over 200 million years later in the late Carboniferous (~310 million years ago) hint that these panarthropods may actually have been successful elements of Paleozoic marine ecosystems for a very long time.

There’s a whole iceberg of weirdness and mystery surrounding these animals and I can’t possibly do them all justice in only a couple of days. So we’ll just have to take a quick look at a few of them before moving on.