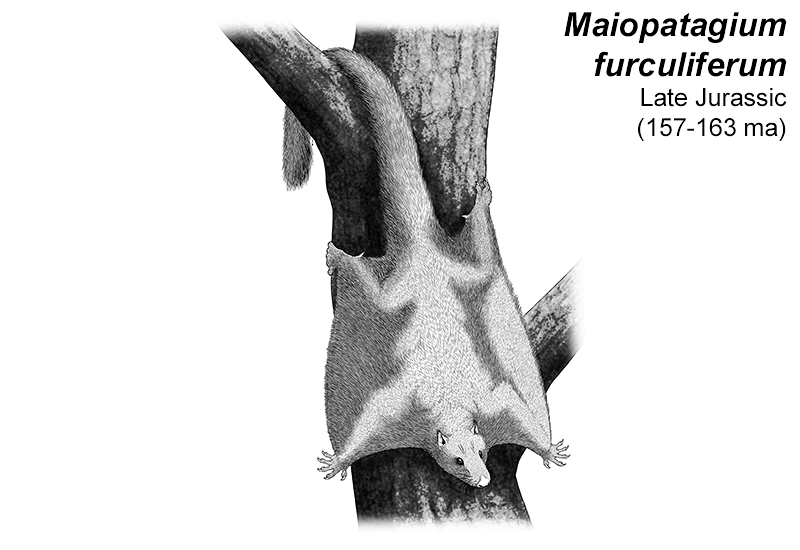 The haramiyidan featured yesterday was a ground-dwelling animal, but most others in the group were actually highly adapted for tree-climbing. They were very squirrel-like in appearance, with grasping hands and feet and tails that may have been prehensile – and some took this lifestyle even further, becoming specialized gliders.

Living during the Late Jurassic of China (157-163 mya), Maiopatagium is one of at least four known gliding haramiyidans. It was about 25cm long (10″), around half of which was its long tail, and had a gliding membrane extending between its wrists and ankles. The proportions of its hands and feet were very similar to modern colugos and the feet of bats, which has been interpreted as evidence of the same sort of upside-down roosting behavior.

Its close relative Vilevolodon had rodent-like teeth highly adapted for crushing and grinding, suggesting these haramiyidans were herbivores feeding mainly on seeds and soft plant matter.

And these gliding haramiyidans also contribute to the confusing classification of haramiyidans – because although Megaconus’ anatomy suggested they might be mammaliaformes, studies of another glider, Arboroharamiya, give a very different result. Its ear bones and jaw show the characteristics of true members of Mammalia, supporting the hypothesis that haramiyidans were actually close relatives (or ancestral to) the multituberculates.