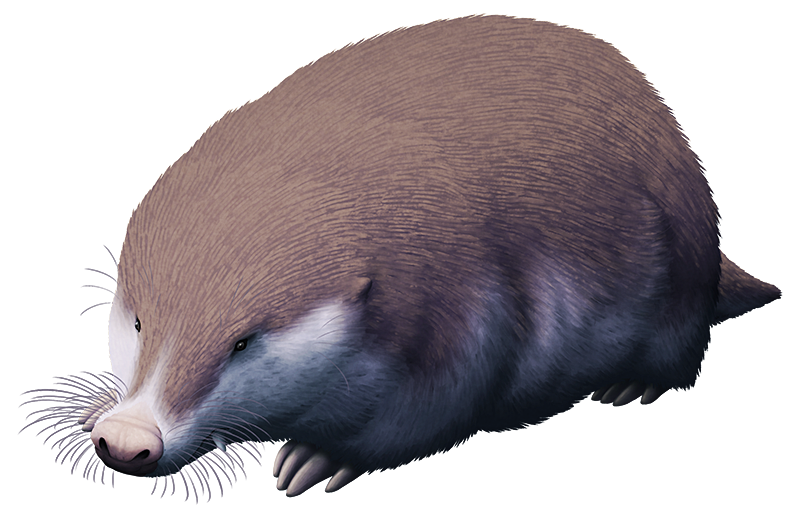 First appearing in the mid-Jurassic, about 168 million years ago, a group of mammals called dryolestoids were some of the closest known relatives to the therians (the group that contains modern marsupials and placentals). They were found throughout North America, Eurasia, and North Africa up until the Early Cretaceous (~125 mya), but then mostly disappeared from the northern continents and instead migrated into South America – where they went on to flourish and became some of the most common mammals in the continent by the Late Cretaceous.

Although mostly known from only teeth and jaw fragments, the dryolestoids seem to have been a pretty diverse group of mammals during the Mesozoic, adapting to a variety of different diets and lifestyles ranging from small insectivores to relatively large herbivores.

Most of them died out in the end-Cretaceous mass extinction, except for the dog-sized herbivorous Peligrotherium which survived until 59 million years ago in the Early Paleocene… and one other known example from much much later into the Cenozoic.

Despite being absent from the fossil record for over 40 million years, the dryolestoids reappeared again in the Early Miocene of Patagonia (~21-17.5 mya) with a single late-surviving member: Necrolestes patagonensis.

The known Necrolestes fossils are surprisingly well-preserved compared to most other dryolestoids, with about a third of its skeleton represented. It was a small mole-like burrowing animal, about 10-15cm long (4-6″), with large canine teeth and an upturned snout. The cartilage in its nose was ossified into bone, strengthening it and probably supporting a pad of thick toughened skin – and also suggesting that it was a “head-lift digger”, using its snout like a shovel to dig through the soil.

While it superficially resembled the earlier mole-like dryolestoid Paurodon, it was actually much closer related to more generalist Mesozoic forms like the sabertoothed Cronopio.

After Necrolestes there’s no further evidence of dryolestoids living any closer to modern day. Much like the late-surviving gondwanatheres they lived alongside, these last dryolestoids may have specialized themselves so much that they couldn’t cope with sudden environmental changes, and the Middle Miocene extinction could have finished them off entirely.