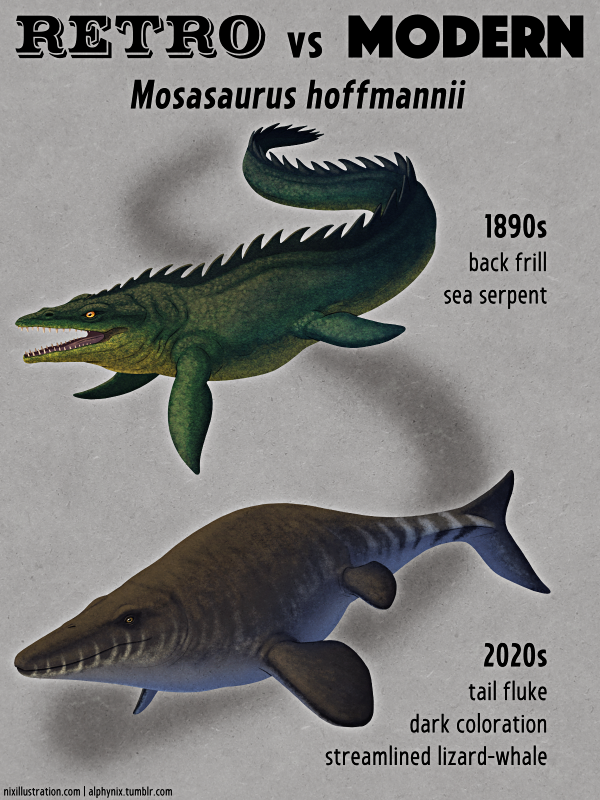 The first scientifically documented mosasaur fossils were skulls discovered in the Netherlands during the 1760s and 1770s, but these remains were initially interpreted as belonging to a fish, crocodile, or whale. In the late 1790s their resemblance to monitor lizards was noted, and the fossils were soon recognized as belonging to giant marine reptiles unlike any known living species – a revolutionary concept at the time, and influential in the early development of ideas about extinction.

In the 1820s Mosasaurus hoffmannii was the first species officially described. For several decades it was thought to be a giant amphibious lizard with either webbed feet or flipper-like legs, with one of the earliest popular reconstructions being the 1850s Crystal Palace statue.

By the 1870s more complete fossil discoveries in North America had revealed the paddle-like flippers and fully aquatic nature of mosasaurs. Skin impressions showed overlapping keeled diamond-shaped scales resembling those of rattlesnakes, but proportionally much smaller compared to their body size.

Then, in the late 1890s, one mosasaur specimen was interpreted as having a mane-like “fringe” of soft tissue along its back.

Only a few years later this was realized to be a mistake, actually being preserved tracheal cartilage, but it was too late. The idea had already caught on in artistic depictions and quickly became a paleoart meme, with mosasaurs frequently portrayed with elaborate frills for the majority of the next century.

Early arguments about whether mosasaurs’ closest relatives were monitor lizards or snakes had settled down by the 1920s, with the consensus at the time being monitor lizards, and the first half of the 20th century saw little mosasaur research beyond the naming of a few new species. Much like the ichthyosaurs and plesiosaurs it was only really in the wake of the Dinosaur Renaissance that interest in these marine reptiles and their paleobiology really began to pick up again.

Rather than sea-serpent-like creatures we now recognize that mosasaurs actually looked more like lizards converging on whales or ichthyosaurs, with smooth streamlined bodies and vertical tail flukes. The size and shape of their scales varied across different parts of their bodies, parts of their bodies had dark coloration (likely with a countershaded pattern), and they probably had forked tongues.

They had a higher metabolic rate than most modern lizards, and may even have been warm-blooded. They probably also gave birth to live young, although a recently-discovered fossil soft-shelled egg found in Antarctica has been suggested to have come from a large mosasaur.

The debate about their evolutionary relationships has been reignited, too, with some recent studies once again supporting a very close relationship to snakes – although there’s currently no clear consensus.

Our modern view of Mosasaurus hoffmannii is a large chunky mosasaur that grew to at least 11m long (~36′). It lived during the end of the Cretaceous period, about 70-66 million years ago, and inhabited a wide range of climates across much of the ancient Atlantic Ocean and various connected shallow seaways, with fossils known from Europe, Africa, and North and South America.

Its long jaws had a powerful bite force and it seems to have been a more visual hunter than some other mosasaurs, with relatively large eyes and a less well-developed sense of smell. It was one of the largest marine animals of its time and was probably a generalist apex predator, feeding on a wide variety of prey such as fish, ammonites, and other marine reptiles.

During the late Cretaceous period, about 72-66 million years ago, the Oulad Abdoun Basin region of Morocco was submerged under the Atlantic ocean – and the water above it was absolutely teeming with mosasaurs.

Fossils of at least a dozen different species of these predatory marine reptiles have been found in the area, and they seem to have all been occupying different ecological roles to avoid being in direct competition with each other. Many had conical piercing teeth adapted for gripping onto slippery soft-bodied prey, but others had rounded blunt teeth for crushing hard shells, and some even had sharp shark-like teeth for tearing flesh.

And one of the most surprising recent discoveries from this diverse ecosystem was Gavialimimus almaghribensis.

This 7m long (23′) mosasaur was part of the plioplatecarpine lineage, but it had uniquely long and narrow jaws with pointy interlocking teeth and highly retracted nostrils. Its snout shape resembled that of a crocodilians like modern gharials more than any of its short-skulled close relatives, and it was probably specialized for a similar diet of small fast-moving fish.

Numerous groups of reptiles have “returned to the water” and become aquatic over the last three hundred million years, but tracing their direct ancestry can be surprisingly difficult. Highly modified and specialized anatomy, lack of transitional forms, and similar features convergently evolving multiple times can all obscure relationships, making it hard to properly classify them.

We’re only just starting to figure out the true origin of turtles (they’re probably archosauromorphs), and they’re a marine reptile group with living members.

Some of the completely extinct ones are even more uncertain. For example: mosasaurs. (Represented here by the eponymous Mosasaurus.)

While some semi-aquatic early mosasaurs are known, and they seem to be closely related to aigialosaurs and dolichosaurs, their exact placement within the squamates is a lot less clear. Traditionally they were regarded as the sister group to snakes, but some studies have found them to be closer to monitor lizards instead, and others have even placed them as much more basal scleroglossans. Their classification in phylogenetic analyses is “highly unstable”, changing depending on what other reptile groups are included, so there’s no real current consensus.

(And even if they are most closely related to snakes, that doesn’t necessarily help much – the exact origin and evolution of snakes is still very poorly known, too!)