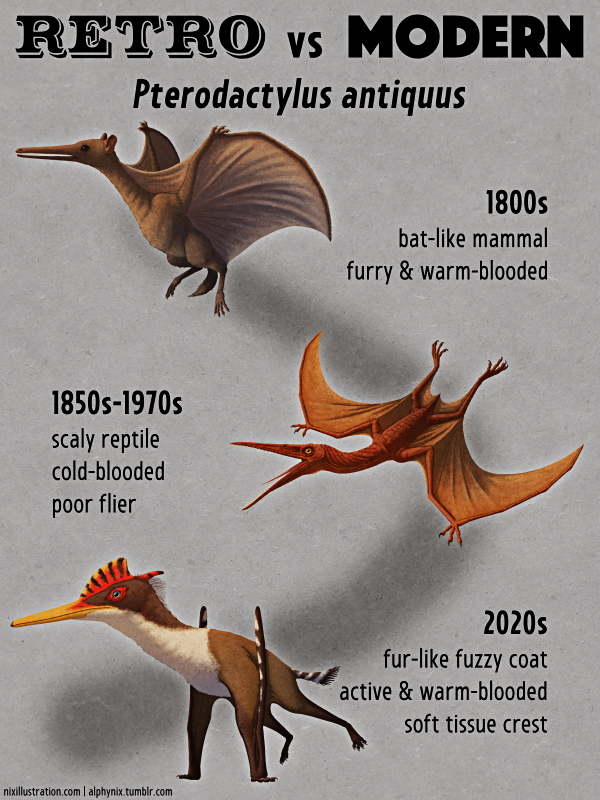 Pterodactylus antiquus was the first pterosaur ever discovered, and in popular culture the name “pterodactyl” has become commonly associated with the group as a whole.

The first known Pterodactlyus specimen came from southeast Germany, and was described (although not yet named) in the 1780s. The modern concept of extinction hadn’t yet been established, so at the time unknown fossil species were generally assumed to still exist alive somewhere in remote regions of the world. Initially it was unclear what type of animal this specimen represented, and it was interpreted as being aquatic because the oceans seemed like the best place for such a strange creature to hide undiscovered.

In 1800 it was recognized as instead being a flying animal, with naturalist Johann Hermann creating both the first known life restoration of a pterosaur and one of the first known examples of scientific paleoart in general. He depicted it as a bat-like mammal with extensive wing membranes, external ears, and a covering of fur, and made two different sketches of this interpretation. The first shows an odd rounded wing shape with the wing finger seeming to form a stiff “hoop” around to the ankles, but the second version has some interesting additions – showing an understanding of the wing finger being straightened and stretching out the membrane, and adding a very large colugo-like propatagium between the neck and the wrist.

In light of our modern understanding of pterosaurs this was an incredibly good attempt at a reconstruction, despite the total lack of soft tissue impressions and the mistaken mammal classification.

The name Pterodactylus was established for this animal by the late 1810s, and while it was correctly identified as a flying reptile by some early paleontologists, others also saw it as being more mammal-like or bird-like.

In this pre-Darwinian time there was no modern concept of evolutionary relationships, and pterosaurs were instead thought to be a type of bat positioned inbetween mammals and birds in the “chain of being“. This “bat model” became influential on the early study of pterosaurs, and some paleontologists depicted highly mammalian versions even as late as the 1940s.

(The aquatic interpretation also stuck around as a competing idea until at least 1930, with  Pterodactylus‘ wings restored as huge penguin-like flippers.)

By the mid-19th century the reptile interpretation had become standard but the bat influence remained, with pterosaurs commonly assumed to have been furry, warm-blooded, and quadrupedal and clumsy on the ground. Fossil evidence of hair-like fuzz had even been found on a specimen of Scaphognathus in the 1830s, but this was later disputed and was only confirmed as being real almost two centuries later.

British paleontologist Richard Owen disagreed with the bat model for pterosaurs, considering them to be scaly sluggish cold-blooded gliders, and in the 1850s oversaw the creation of the heavily-scaled and oddly goose-like Crystal Palace Pterodactylus statues – one of their first major portrayals to the general public, and influential in the popular perception of these animals at the time.

But even into the start of the 20th century some paleontologists were still arguing for active warm-blooded pterosaurs, with the first popular book on the group in 1901 suggesting they were closely related to birds. German paleontologists continued to interpret pterosaurs this way into the 1930s, but in contrast English and American scientists largely lost interest in these animals over subsequent decades – and depictions of pterosaurs went the same way as non-avian dinosaurs during this period, descending into awkward evolutionary failures that could barely even fly, shown as scaly-skinned or naked, and hanging upside-down from trees and cliffsides like giant wrinkly bats.

The discovery of definite hair-like structures (known as pycnofibers) on Sordes brought pterosaurs into their own renaissance in the 1970s, and among a flood of new discoveries they were reinterpreted as active warm-blooded bird-like animals. Reconstructions sometimes went a bit too bird-like, though, attempting to distance themselves from the older saggy-repto-bat portrayals, with forced bipedal postures and much more slender wing membranes attaching to the waist.

But early 21st century studies into biomechanics, soft-tissue remains, and trackways confirmed that some elements of the bat model had actually been right the whole time. Pterosaurs had flight membranes attached to their hind limbs and were quadrupedal when on the ground – but instead of being awkward bat-like sprawlers they were actually competent walkers and runners with an energy-efficient upright posture.

We now know Pterodactylus lived during the Late Jurassic, about 150-148 million, at a time when the region of southern Germany was part of an island archipelago in a shallow tropical sea. Fragmentary remains are also known from elsewhere in Europe and in Africa, suggesting this genus had a fairly wide range.

It was a fairly small pterosaur, with the largest adults having am estimated wingspan of around 1m (3’3″), and had long straight jaws lined with numerous pointed teeth. Most known specimens are juveniles, but fossils of larger adults preserve evidence of a soft tissue crest with a backwards-pointing “lappet”, and long mane-like pycnofibers on the back of the neck.

Like other pterosaurs it was fuzzy and warm-blooded, and it had hollow bird-like bones and air sacs lightening its body. Its wings were highly complex with layers of strengthening fibers and muscles that allowed the flight surface shape to be precisely controlled, and when walking on the ground it could fold up its wing fingers and stow the membranes well out of the way of its limbs.

It was probably a generalist carnivore, feeding mostly on small prey like invertebrates, and the shape of the sclerotic rings in its eye sockets suggest it was mainly active during the daytime.