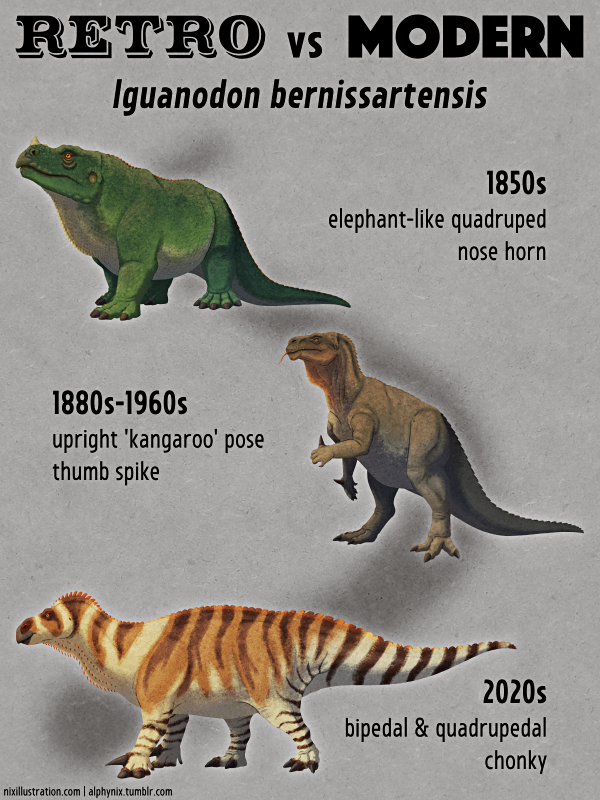 Named just a year after Megalosaurus, in 1825, Iguanodon has remained a fairly iconic dinosaur ever since.

Discovered in a different region of Southeast England, its fossilized teeth were soon recognized as being similar to those of modern iguanas – but much much larger. Partial skeletal remains were initially reconstructed as belonging to a gigantic herbivorous lizard, with what was thought to be a horn placed on the tip of its nose.

The Victorian Crystal Palace statues of Iguanodon depicts a more bulky reptile with a nose horn, a toothless beak at at the front of its jaws, scaly skin, thick upright legs and hoof-like claws. Much like the Megalosaurus of the time it’s really not nearly so bad of a reconstruction as it’s often accused of being, showing a surprisingly naturalistic and almost mammal-like interpretation of these animals compared to later portrayals.

Technically the particular “Iguanodon” species at Crystal Palace has more recently been renamed Mantellisaurus atherfieldensis, but it was considered to be Iguanodon at the time so it’s included here anyway.

A massive discovery of the remains of nearly 40 Iguanodon individuals in a coal mine in Bernissart, Belgium, revealed the full anatomy of these dinosaurs for the first time. Much more well-preserved and complete than the patchy English material, these larger Iguanodon bernissartensis eventually became the official type species for the whole genus – a standard used to help determine whether similar-looking fossils are Iguanodon or not.

The Bernissart specimens were restored as bipedal animals in an upright kangaroo-like pose, with their tails dragging behind them acting like a tripod to prop them up. What had previously been the single “horn” was finally realized to instead be a thumb spike on each hand, interpreted as a defensive weapon against predators.

This image of Iguanodon persisted for decades, with a giraffe-like long prehensile tongue sometimes also depicted (including a particularly bizarre interpretation of it sticking out through a hole in the lower jaw!).

The Dinosaur Renaissance in the late 20th century corrected Iguanodon‘s posture to hold its body horizontally, and it was eventually recognized as being capable of both bipedal and quadrupedal movement. Juveniles were found to have walked more on their hindlimbs, while adults spent more time on all fours but were still capable of running bipedally when they needed to.

We now have fossils of Iguanodon from across much of Europe during the Early Cretaceous, about 126-122 million years ago. Our modern view of this animal is a heavily built ornithopod that grew to around 9m long (~30′), with a horse-like head, a large keratinous beak at the front of its jaws, chewing teeth further back, and cheeks covering the sides of its mouth. Its chunky forelimbs each had a large thumb spike, hoof-like claws, and a prehensile grasping pinky finger, while its powerful hindlimbs ended in three-toed vaguely bird-like feet.

Soft tissue preservation discovered in related hadrosaurs suggests it probably also had a very bulky body with a thick heavily muscled neck and tail, and possibly an ornamental “frill” running along its back. Skin impressions show a covering of numerous tiny pebbly scales, generally too small to have been visible from a distance. 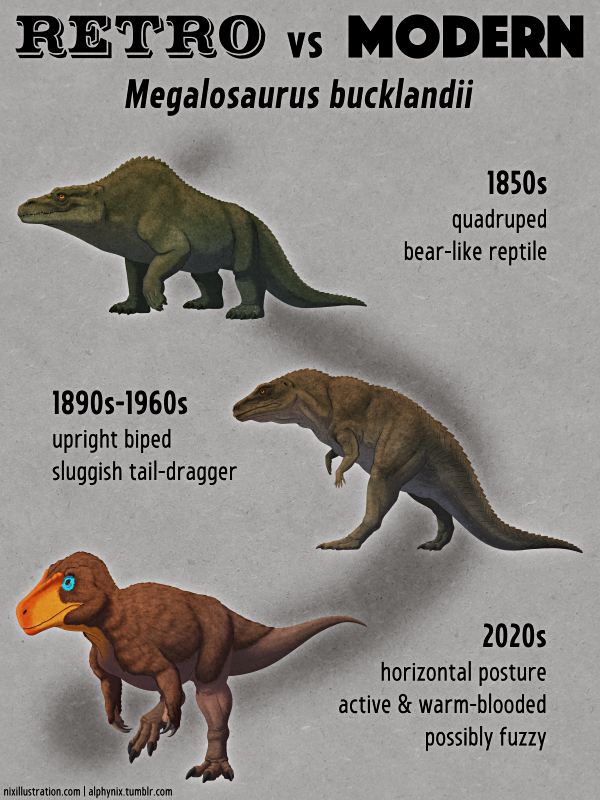