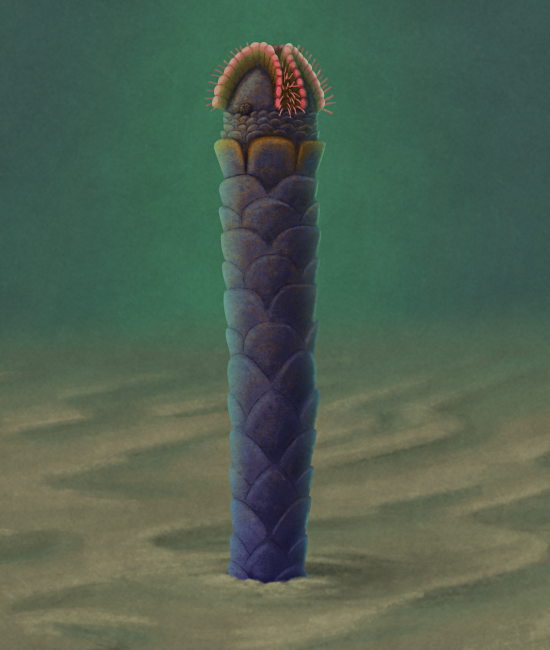 Modern hemichordates and echinoderms are the closest living relatives of each other, part of a larger lineage of deuterostome animals known as ambulacrarians – but they also seem to have had some other strange cousins during the Cambrian.

Cambroernids were a bizarre group with branching feeding tentacles and a gut enclosed in a coiled sac. They came in a range of forms from worm-like to cup-like to disc-shaped, and despite their fossils being known since the early 1900s their evolutionary affinities were a longstanding problem. Various species had been interpreted in the past as sea cucumbers, jellyfish, tunicates, gnathiferans, or lophophorates, but in recent years they’ve been recognized as all being related, and linked to the ambulacrarians.

And it’s still not entirely clear where in that group they actually belong. They were probably a weird early stem lineage, but they might also be early stem-hemichordates or stem-echinoderms.

END_OF_DOCUMENT_TOKEN_TO_BE_REPLACED

It seems like echinoderms became five-way symmetric incredibly quickly following the group’s first appearances in the early Cambrian. We don’t really know why this secondary radial symmetry evolved in the group – but we do know that the common ancestors of all modern pentaradial echinoderms were suspension-feeding animals that lived attached to the sea floor.

And those ancestors were probably a group called the edrioasteroids.

END_OF_DOCUMENT_TOKEN_TO_BE_REPLACED

While many of the earliest echinoderms had bizarre asymmetrical forms, at some point members of their lineage adopted radial symmetry instead – a development that would eventually lead to the familiar five-way symmetry of most modern species.

And they may have transitioned to that via three-way symmetry.

END_OF_DOCUMENT_TOKEN_TO_BE_REPLACED

During their early evolution, echinoderms started developing unusual asymmetric body plans – and some of them were so strange-looking that for a while it wasn’t clear if they even were echinoderms.

END_OF_DOCUMENT_TOKEN_TO_BE_REPLACED

Modern echinoderms typically have five-way radial symmetry as adults, and don’t at all resemble other deuterostomes – but their larvae give away their ancestry, still retaining bilateral traits and only developing radial symmetry when they mature and metamorphose.

The earliest definite echinoderms are known from the early Cambrian, about 525 million years ago, which seems to be around the point when early members of the group first developed biomineralized skeletons and became much more likely to fossilize. However, they must have an evolutionary history going back further than that, and molecular clock estimates suggest their last common ancestry with their closest relatives the hemichordates was in the Ediacaran about 570 million years ago.

For a long time the transition from bilateral to radial symmetry was a mystery, but various fossil discoveries are starting to reveal how this unique group of animals evolved.

END_OF_DOCUMENT_TOKEN_TO_BE_REPLACED

Enteropneusts, commonly known as acorn worms, are the most numerous group of modern hemichordates with over 100 known species. Most of them burrow in sediment eating organic detritus, but a few are filter-feeders and some deep-sea species crawl and drift around over the sea floor.

Their fossil record is poor due to their soft bodies, but the transitional form Gyaltsenglossus has recently given us a glimpse at acorn worms’ ancestral links with their cousins the tube-dwelling pterobranchs.

But that’s not the only fossil hemichordate with surprising traits from both lineages. It turns out the characteristic tubes of pterobranchs may actually have been ancestral to all modern hemichordates – with the acorn worms later secondarily losing the ability to make them.

END_OF_DOCUMENT_TOKEN_TO_BE_REPLACED

Now we get to the bilaterians, all the animals with bilateral symmetry as an ancestral feature.

The hypothetical common ancestor of all bilaterians (the “urbilateria“) was probably a tiny worm-like species, and likely originated sometime in the early Ediacaran Period. The earliest definite body fossils of bilaterians come from about 558 million years ago, and possible burrow traces are a little older, from about 585 million years ago – but it was during the Cambrian Explosion that this group rapidly diverged into a wide variety of forms and ecological niches.

The deuterostomes are one of the two major evolutionary branches of the bilaterians, made up of modern hemichordates, echinoderms, and chordates (including the vertebrates). They split from their last common ancestor with the protostomes sometime during the Ediacaran, but the earliest probable deuterostome fossils are weird tiny potato-like blobs from the very start of the Cambrian.

(…We’ll talk about those later in the month.)

Hemichordates are the closest living relatives to echinoderms, and are a small phylum with only around 130 known modern species (most of which are acorn worms). But in the distant past they were much more numerous, with graptolites being major components of Paleozoic planktonic ecosystems.

All living members of this lineage have a three-part body plan, but they’re otherwise very different in both appearance and ecology. Acorn worms are solitary worm-like animals living on in the sediment of the sea bed, and are mostly detritivores, while pterobranchs are tiny colonial filter-feeders that build protective tubular structures.